John's childhood ambition was to become a professional cricketer. He captained Middlesex schoolboys, played for London schoolboys and was on the groundstaff at Lord's as an M.C.C. Young Professional. Although he didn't make the grade, he enjoyed many future years playing club cricket.

Returning to school after his time on the groundstaff, he went on to read Law at Queen Mary, London before qualifying as a solicitor and setting up his own practice in 1980. He retired recently as the senior partner of his firm. On the basis that it is never too late to begin a new chapter in life, at seventy-two, John now hopes to start a new career as a novelist, while also enjoying more time with his three granddaughters and walking in the beautiful country parks of North Enfield with Sally, his wife of forty-four years, and their Labrador, Victor.

And then there is his other passion: a masochistic attachment to Tottenham Hotspur Football Club. He is old enough to remember when Spurs were the undisputed top-dogs of elite football - the glory days of 1961 when they were the first team to win the League and Cup Double in modern times. Although another title is still awaited, he retains his season-ticket with his son and daughter, since hope springs eternal as they all enjoy watching them flatter to deceive.

John is now looking forward to the publication of his first novel, Hosting Andrew, and hopes it will prove distracting, entertaining and, perhaps, thought provoking for those who are tempted to read it.  . 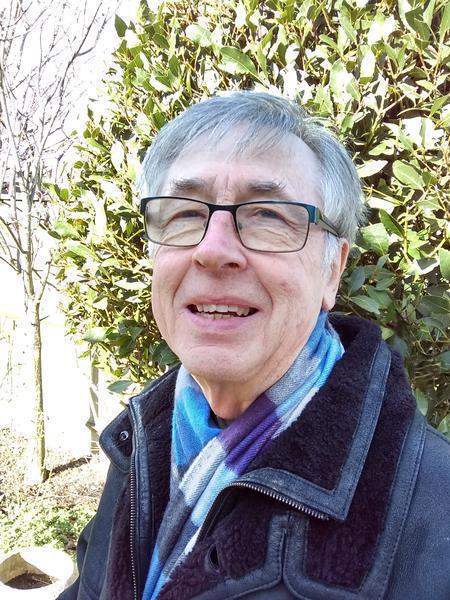 “This afternoon I shall go to my own funeral service before I watch them bury me under six feet of London clay.”

When kindly provincial solicitor, Andrew Soulsby, fails to listen to his instincts he is condemned to live an evil man’s life in a tailspin to destruction. Plagued by dark memories that do not belong to him and arrested for crimes of which he has no knowledge, he faces professional ruin, bankruptcy and a prison cell.

Can Andrew discover what has happened to him, and will he find a way to survive if he regains the love of his wife and children, or is the truth altogether more terrifying?

Fantasy meets grim reality in this gripping medico-legal mystery thriller with an original twist, making you question what it means to have a soul, a sense of self.

John Lawrance studied Law at Queen Mary, London, before qualifying as a solicitor. He lives in Enfield with his wife and their Labrador called Victor. In his youth, he was on the ground-staff at Lord’s as an M.C.C. Young Professional. A Spurs fan and season ticket holder, he enjoys watching matches with his son and daughter. At the age of seventy-two, Hosting Andrew is his first novel.