Dean and I arrived at the Royal College of Physicians to be welcomed by a marvellous red-carpet entrance and a swarm of eager paparazzi. The event, which was hosted by writer, comedian and actor Katy Brand celebrated the epitome of UK writing talent in an audience made up of those from a range of creative industries. Joining some of the most critically acclaimed writers and creatives for a champagne reception before the awards was an absolute honour.

The fifteen categories awarded during the ceremony spanned film, TV, theatre, radio, books and more. Finally Woken by Dean Moynihan was in the shortlist for the ‘Best First Novel Award’ and was pitted against stiff competition from Season Butler (Cygnet, Harper Collins) and Angela Readman (Something Like Breathing, And Other Stories). In Finally Woken, Max Hope wakes up in hospital to find that he is under arrest for murdering his wife and children. However, a severe head trauma causing retrograde amnesia has wiped all memory of his adult life. The murders were motiveless; the investigation is questionable; the defence lawyer is clueless. Max’s life as a seemingly successful family man unravels into a story of failure, paranoia and lies…

Opening the ceremony, host Katy Brand said of the event:

“I am thrilled to have hosted the WGGB Awards 2020 this evening, not least because it means I spent an evening with the best writers in the world without having to worry about winning anything myself. I just enjoyed the immense throb of talent in the room, and hopefully helped make the evening entertaining, inclusive, and a celebration of all the outstanding work of the past year – congratulations to all the deserved brilliant winners.”

Dean Moynihan comments, “It was incredible to be shortlisted for this prestigious award and to be sharing the centre stage with so many talented creatives was a pleasure. In the end, it was Season Butler’s ‘Cygnet’ that took home the Best First Novel Prize, but it was a great accolade to make the final shortlist and I look forward to seeing what comes next.”

Throughout the evening, awards were presented by some of the most-loved figures of the creative industries. Among them included Sandi Toksvig OBE, Paula Wilcox, Samira Ahmed, Simon Beaufoy and Nigel Plaskitt with Hartley Hare. In a final speech by the WGGB President, Sandi Toksvig OBE said:

“Congratulations to all the Writers’ Guild Awards 2020 winners, it’s a sheer joy just to be in a room amongst such wonderful writers. These ridiculously talented people have kept us entertained throughout the year with their brilliant writing, they have brought us much-needed tonic during these challenging times, and we have been spoilt rotten by their wonderful creations.” 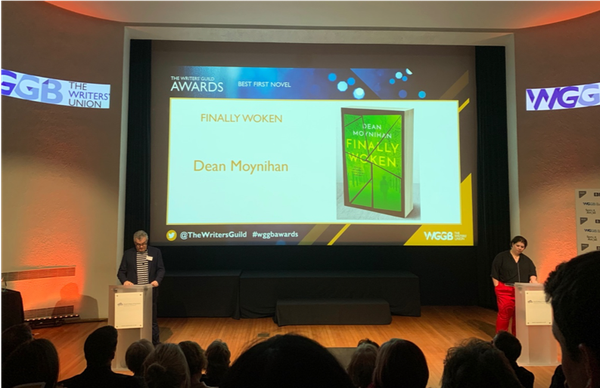