For 40 years my friend from the post-war bomb-sites of Birmingham had an abiding ambition to become a published author.

Ever since eccentric Mike Leaver was paid to write a magazine article while living destitute on a derelict houseboat, he dreamed of being a wordsmith to fund his mountaineering expeditions.

That article led the editor to refer Mike, then 30, to meet a famous author at his home in the North Wales mountains. So inspired by the writer's way of life, he decided to emulate it by moving to Snowdonia himself.

But aspiring Mike was a part-time handyman living off-grid in a converted static lorry on a small-town business park. Despite this, a leading London publishing house did briefly consider his first draft manuscript of a novel.

Around 15 years later, I met Mike when I was working in the town as a local newspaper reporter and needed help with some DIY jobs at home. As we built walls, he told me a few of his real-life adventures – and I instantly knew he was an eccentric character with some amazing tales!

While Mike regularly refused my requests to do a newspaper feature interview, he did say he had two almost-finished, draft fiction manuscripts, if I might be interested to read them?

So, I spent a few weeks using my former skills as a newspaper sub-editor to edit and proofread his efforts. And I was really pleasantly surprised by the style, quality, and sustained length of his prose.

I suggested we try to fulfil his lifelong ambition by my researching the publishing industry, houses and agents, the many genres, and the current submissions process and requirements.

Helped hugely by The Writers' & Artists' Yearbook online, I quickly advised Mike – who has never had TV, internet, mobile communication etc and writes on an old battery-powered laptop largely by candlelight – that his manuscripts were modern/women's/romantic fiction.

I also told him that, however good our submitted author biography, novel synopsis, and first three chapters or 10,000 words, competition among debut authors for a publisher's acceptance and a book deal was extremely tough. Even as novices with few resources, it is easy enough these days to self-publish. But we agreed we wanted the respect and credibility of a leading house.

Undeterred, we submitted and pitched to around 30 selected publishers/agents. During the next three months, I carefully monitored and reported to Mike their responses. Largely speaking they all credited his writing. But because he was an unknown debut writer and a retired man creating middle-aged women's stories, they were unable to offer a fully-funded traditional deal.

However, three publishers did offer a partnership deal to share the risks and costs. While I researched other authors' independent-user reviews of each, Mike used his skills as a former company accountant, to examine the contractual details regarding editorial control, copyright, and royalties etc.

Only one publisher passed our rigorous due diligence checks with flying colours – The Book Guild Ltd! Mike used his pension income to fund half the cost of their proposed services.

So, I submitted the final manuscript for his debut novel 'Nork From Nowhere' in early-2021, and then just a couple of months later, that for 'The Ice Cream Terrorist'. Both went through Book Guild's thorough editing, typesetting, cover design, and trade & PR marketing processes. All communication was by email and Zoom due to Covid lockdown.

Professionally produced, printed with a guaranteed minimum run, and marketed across the UK by BG – and supported by our local promotional work with the town's award-winning independent book shop, posters everywhere, and a social media campaign on Facebook, Twitter, and LinkedIn – 'Nork' and 'Terrorist' were duly launched officially.

Single Mike has a simple ambition to become a published author – to leave a legacy of books that might inform and entertain readers – and a limited budget, rather than a desire to make a celebrity fortune. We have therefore eschewed BG's additional marketing services, such as a website, videos, and book trails etc, just for now.

However, such has been the relative critical and sales success of 'Nork' and 'Terrorist' both locally and UK-wide within the first year, BG decided to accept Mike's third book. His eagerly-awaited and intriguingly-titled autobiography 'Yeti Seeks Mate: In Pursuit Of Dreams' was recently published – and is already enjoying record sales at our local book shop.

For the first time in 20 years this summer, Mike left his adopted home county when I drove him to meet the BG team at their HQ near Leicester. He was overwhelmed by their warm welcome, experience, and professionalism. Especially when, during the meeting, they announced acceptance of his fourth book (another novel) which we had submitted only the week before, and expressed interest in a second part to his autobiography, as well as a further novel!

So, from a dream on a derelict boat four decades ago, it is possible that, within the space of just five years, Mike will have written almost a million words, had six books published, and been the focus of countless PR campaigns – all thanks to the brilliant BG's partnership programme and first-rate services! 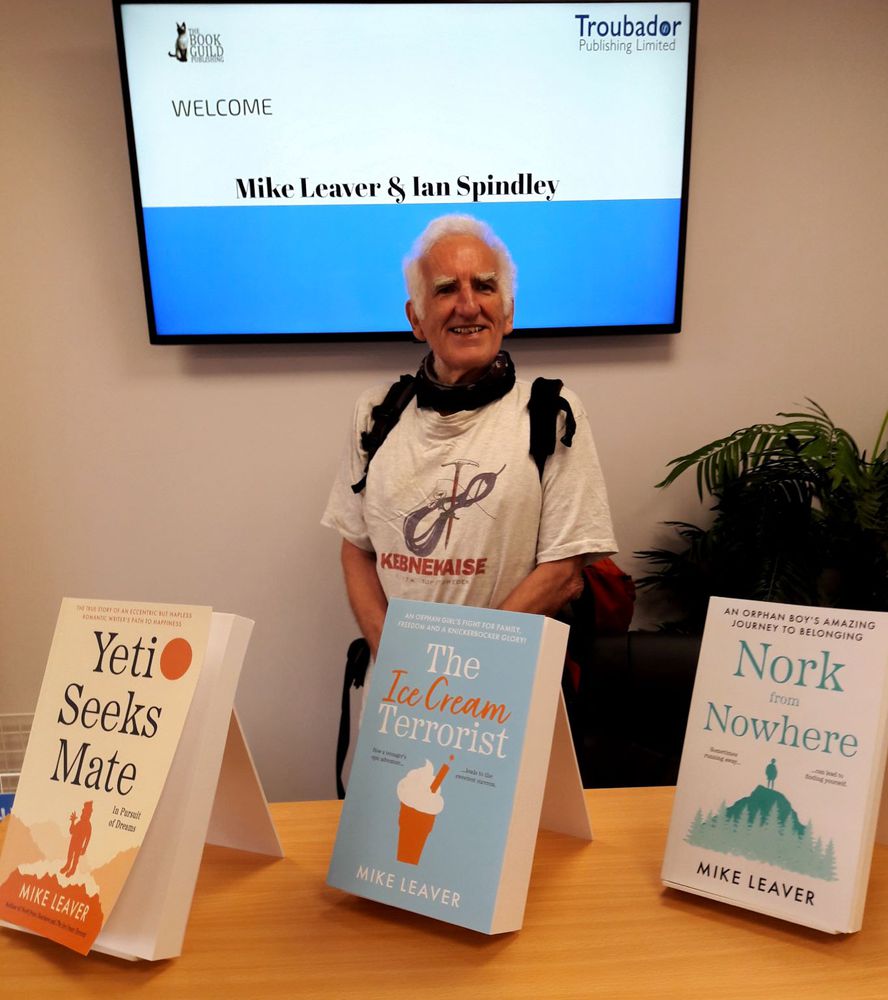