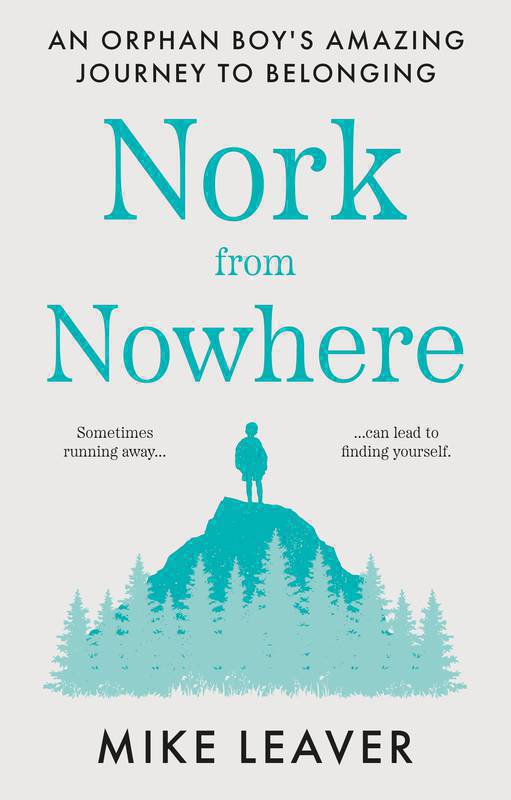 Nork from Nowhere: An Orphan Boy's Amazing Journey To Belonging

Together they go on the run. Evading the authorities and becoming ever more inter-dependent during their long journey, they finally land up in the Scottish wilderness.

They find themselves in a small loch-side town, but will they become the victims of the ruthless, hotel owner McTavish – or can they discover a new life and purpose there?

This is a coming-of-age story with comedy, romance and sexual references, that is both thought-provoking and amusing.

Mike Leaver is a semi-retired, handyman aged 68. He lives in a converted, static 10-ton truck on a small-town business park in Snowdonia – and writes books for pleasure. Mike’s immobile home has no electricity, mains water or central heating. As well as writing his first two novels – largely on a lap-top by candlelight in his lorry – he is penning his life story. Like Alan Bennett’s eccentric The Lady in The Van, Mike has become a well-known character around his adopted home of Porthmadog.

I was only a few pages into this book when I realised that it was going to carry me along on a roller-coaster ride with the eponymous 11-year-old Nork and the people he encounters.

From the moment of his first extraordinary meeting with middle-class Sara, the pace rarely falters, as they embark on their journey together, away from events and situations they both wish to leave behind.

A range of diverse characters weave their way through the novel. All the main characters are skilfully portrayed, with lots of physical description. As the novel progresses, they come to life and their personalities grow and develop as they are influenced by each other.

Minor participants in Nork's progress provide comic interludes. I particularly enjoyed the colourful encounter with a gardener and his wife, from whom Nork acquires his somewhat eccentric mode of transport.

Although some of the situations in which the characters find themselves are unconventional, to say the least, they remain believable. This is helped by a flowing narrative style and realistic dialogue.

However, there may be some readers who will dislike the limited sexual content, which may be a little too explicit for their tastes.

This is a refreshing coming-of-age tale that will appeal to readers who enjoy a brisk story, full of action and peopled with a variety of characters, both good and bad. It made me smile but, above all, it gave me food for thought.

Ultimately, this is Nork's story. Sara's first impression of him is that he is an hallucination; his perplexity with the world around him is both amusing and, at times, heart-wrenching.

But is 'Nork from Nowhere?' The only way to find out is to read the book and decide for yourself.

I have been an avid reader since childhood and progressed to a degree in English and Education. A career in Early Years teaching followed, nurturing children's literary skills and love of story telling. I later moved to North Wales in pursuit of other interests, and was a Women's Institute officer in various roles for many years.

This beautifully written book opens with teenager Sara fleeing her parents’ mansion wearing only a scant and impractical item of 'clothing'. It was an impulsive action driven by the fear of her strict parents’ reaction to the discovery of her out-of-control house party.

Nork, a mysterious young orphan boy, appears from nowhere on a river before her, and he is clinging on to a fencing panel. Unlikely as it may seem, together they go on the run, evading the authorities. It is the start of a fascinating journey that takes them to the wilds of Scotland.

I loved the journey of these two main characters, and the way their personalities and relationship develop. Innocent Nork hopes Sara can become his mother, but she knows that can never be. These characters are well constructed and though-provoking, coming even more to life with each strange and often challenging situation they encounter.

At first, I found the lack of knowing in which era the story is set, prevented me from fully immersing myself in the journey. So I was a bit hesitant to just allow myself to go along with Sara and Nork on their adventure.

But Mike has clearly and deliberately left the era – which is probably the 1980s - open for we the reader to decide. I was so glad that I put my initial confusion aside and got on a train to Scotland with Sara and Nork. Their lives from then on, in a small loch-side town with some amazing characters, certainly take some strange and satisfying twists!

This debut novel clearly draws on Mike’s own knowledge and experiences, and we get the obvious impression that many of his characterisations come from those he's really met along the way. Others though are larger-than-life and definitely products of a vivid imagination.

'Nork from Nowhere' is a pleasure to read, full of adventure, comedy, and romance, with interesting characters who find themselves in unusual situations. Mike's storyline flows smoothly and kept me hooked right through to the end. A really creditable effort by a debut author, especially a retired handyman writing modern/romantic fiction.

* Margaret Scriven is a full-time hotel receptionist and avid reader living in Dolgellau, North Wales. Originally from near Corwen, she is a mother of grown-up children, has worked in hospitality all of her life, and also enjoys music and learning Spanish.