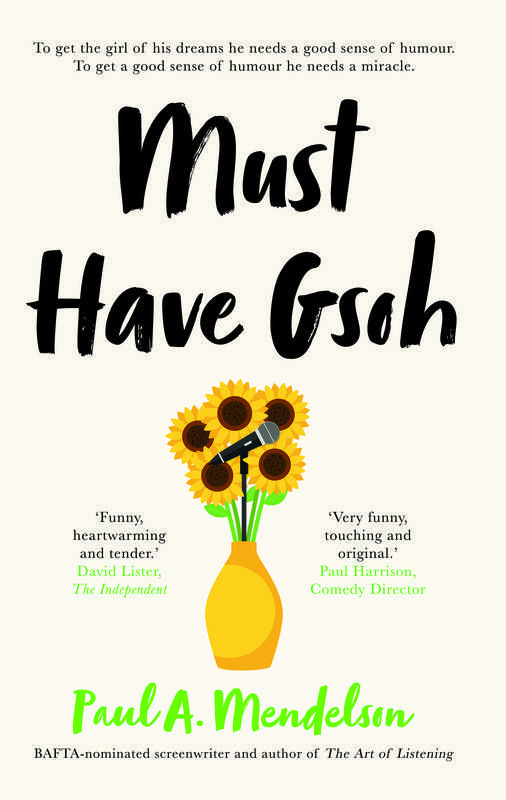 To get the girl of his dreams he needs a good sense of humour.

To get a good sense of humour he needs a miracle.

Stephen Gibson is a gifted young horticulturist. But surprisingly this isn’t the quality most women look for in a mate. According to all the ‘personals’, it’s GSOH . A good sense of humour. Trouble is, Stephen doesn’t have one. Not a trace!

Surely he can acquire a GSOH – and win the girl of his dreams. How hard can it be? He reckons the Killer Comedy Academy can teach him all he needs to know.

Yet it’s the person he least expects who shows him how he can really stand-up for himself.

Praise for Must Have GSOH:

‘The concept is brilliant: an insider’s guide to the business of making people laugh, wrapped up in a delightfully funny and uplifting love story.’

‘I laughed, I cried, I nearly took up gardening.’

Paul A. Mendelson is the BAFTA-nominated creator of several hit BBC comedy series, including May to December, So Haunt Me and the long-running My Hero, starring Ardal O’Hanlon as the hapless superhero Thermoman. He co-created Neighbors From Hell for DreamWorks Animation and wrote the acclaimed ITV drama Losing It starring Martin Clunes. Paul’s first novel, In the Matter of Isabel, was published in 2017 and is being developed as a movie with a major Hollywood company. Paul has written two books for children, Losing Arthur and The Funnies, which was praised as ‘Orwellian but with laughs’. His most recent ‘grown-up’ book, The Art of Listening, a collection of humorous shorter fiction, was called ‘compelling and often disconcerting’ by The Independent. Paul lives in North-West London and is married with two daughters and four grandchildren.

Looks like there are no reviews for this book yet. Be the first to review "Must Have GSOH".